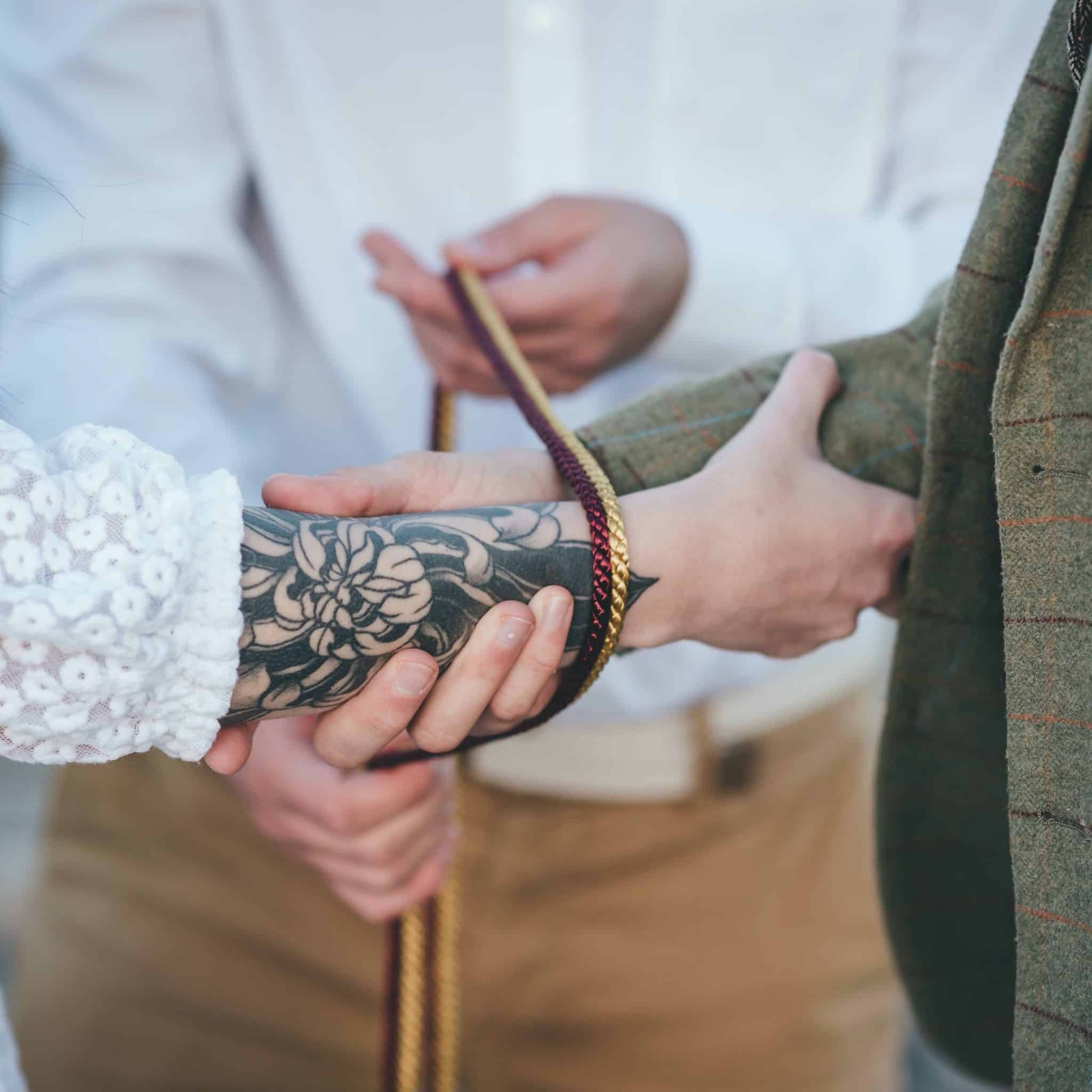 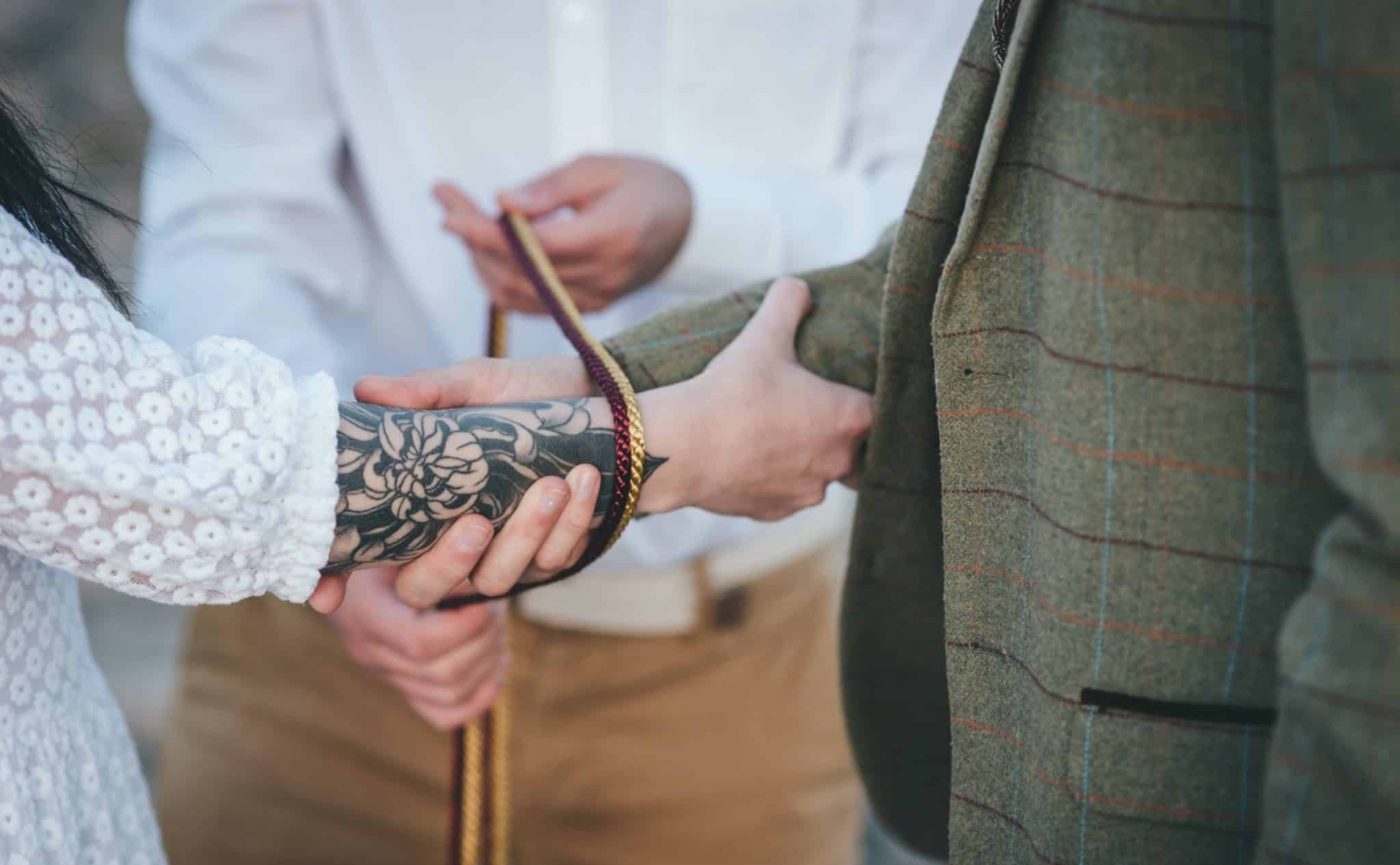 As weddings have begun to move away from the traditional settings of church interiors and registry offices, couples have begun to realise that they have much greater flexibility when it comes to what exactly their wedding ceremony is going to look like. As a result, new traditions with vaguely historical roots have come into fashion, and none is more popular than the handfasting ceremony.

Almost all celebrants will offer handfasting as part of the services that they offer a couple on the big day, but you may be asking: what exactly is a handfasting ceremony? What does it represent? And how does it work on the day? All of these questions will be answered below.

Everything You Need to Know About Handfasting

What are the origins of handfasting?

The term ‘handfasting’ has been used to mean several different things over a span of thousands of years. The term itself was probably loaned into the English language from the Old Norse handfesta, which was a term used to mean ‘to strike a bargain by joining hands’. Thereafter, from around the 12th to 17th century, the term ‘handfasting’ simply referred to ‘engagement to be married’ – i.e. the moment a couple formally declared their intention to be married. Back then, a handfasting was legally binding: as soon as the couple vowed to marry, this could only be dissolved by death – divorce wasn’t legalised in the UK until 1857! Quite different from today’s engagement traditions!

The ceremony itself – in which the couple’s hands are bound by one or more pieces of ribbon or cord – is generally regarded as having Celtic or Pagan origins, although there’s little historical evidence to back this up. It may have only recently – as late as the 1960s – become popular through Wiccan practices and gradually adapted into mainstream weddings. Indeed, the phrase ‘handfasting ribbon’ has only been in use since 2005, suggesting that the ritual is far more modern than people might like to admit.

What is a handfasting ceremony? 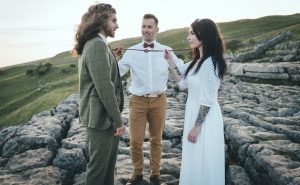 The modern handfasting ceremony is one in which the couple hold or lock hands while a ribbon, cord, or other type of binding is wrapped around their hands. Often, the couple exchange rings and vows while the cord is in place, before releasing their hands, and either they or the celebrant – depending on a number of factors – will tie a knot in the cord, symbolising the unbreakable bond between the couple.

That’s not all there is to it, though: each cord or ribbon will likely be in a certain colour, which will represent a facet of the couple’s relationship. This is best explained with an example of what the celebrant might say while wrapping the cord around the couple’s hands:

“Red is the colour of compassion, illumination, wisdom and support. It symbolises warmth and love, and the knowledge that there will always burn a passion in these two hearts for the other. Brad and Mia, do you promise to shine a constant light on what you share, be wise, support each other, and keep a fire burning in your hearts for each other?”

Hopefully, the couple responds with a “We do.” Otherwise, there might be a problem.

How can a handfasting be personalised?

Handfasting ceremonies are some of the most flexible elements in any wedding ceremony. You can have as many or as few ribbons as you want, and it can be very moving to have different family members on each side come forward and drape the ribbons over the couple’s hands, representing their acceptance into each other’s families. The words spoken during this time can also be tailored specifically to the couple and the family member.

Handfasting can also be used in naming ceremonies for children, too, with parents and guide parents coming forward to welcome the child into the family.

However you decide to utilise it, handfastings can be a touching and memorable part of your wedding day. Find a celebrant now who can conduct a ceremony tailored to you.

This post was written by Mark Gregory. Photos were taken by Sam Chipman Photography.