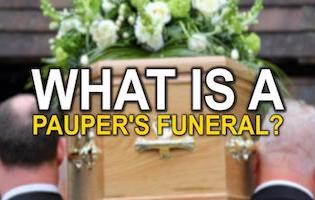 What if there is none?

“The Cost Of Pauper Funerals Is Rising‚”, proclaimed recent headlines, along with a simultaneous shining of the journalistic spotlight onto so-called funeral poverty‚’.

The cost of funerals is always enough to cause dark mutterings, calls for government enquiries and heated articles in the tabloids. But in a world now obsessed with labelling everything as a pressing social issue, amongst ‘Islamaphobia’ and Trans-gender discrimination‚’ we find Funeral Poverty‚’ being tucked in to the lexicon of contemporary social problems. As usual, the reality is complex and riddled with inconvenient truths and it takes a brave soul to try explaining it.

So here we go…

In recent years, the cost to local authorities of so-called ‘pauper funerals’ has risen almost 80% to  £11.7m. Public health funerals, as they’re properly known, are carried out by local authorities for people who die alone or without relatives able to pay. Although historically the preserve of people who’d fallen through the social net, the increase in public health funerals can largely be traced to people living longer and thus more likely to die alone. But the ever-growing number of marital breakdowns and fractured family relationships is in turn why more people find themselves alone in the first place.

Local authorities carried out 6,580 public health funerals in the 12 months spanning 2016-17, representing still only a small fraction of the circa 350,000 UK deaths each year. A no-frills public health funeral will cost somewhere around £1500 and although attempts are made to recover some of the costs from the deceased’s assets, the total bill to local authorities was still £11,719,329 – an increase of 78% in the past 10 years. So there’s your newspaper headline.

But hanging on the coat tails of that story is the sequel: ‘funeral poverty’ – the inability to afford a funeral. The average funeral now costs approximately circa £3,850 nationally, (£4,850 in London). People receiving benefits can apply for assistance from the DWP Social Fund, which will cover the necessary third party costs of a simple burial or cremation and up to £700 towards funeral director’s fees. But there’s no guarantee an application will succeed and because you need a funeral invoice to make a claim, families & funeral directors alike are exposed to unacceptable risk of debt right from the outset.

The £700 funding amount hasn’t changed for over a decade – while funeral director’s costs have gone up year on year (they have wages, electricity, fuel and business rates to pay, just like everyone else). Meanwhile, third-party costs have risen way above inflation. Cremation fee rises are largely due to EU regulations; burial fees are high because, with burials accounting for only 30% of deaths anyway, cemeteries are almost always run at a loss and require constant subsidy. Conversely, some cash-strapped local authorities are choosing to privatise their bereavement services (crematorium/cemeteries), transforming them into cash cows for raising desperately-needed revenue to fund other services. They subcontract their management to private operators like the big funeral chains, but inevitably with little downward effect on the fees.

Bereavement is of course often unexpected and so for people on low incomes especially, funeral & associated costs will inevitably far exceed their financial means. As a result, there’s now some anecdotal evidence that struggling families are washing their hands of responsibility altogether, in the hope their local authority will provide a public health funeral. Some local authorities struggling with this additional burden are conducting these funerals and not telling the families where and when.

But here’s the Katie Hopkins bit: the desire to offload responsibility onto the local authority and obtain a public health funeral actually represents, a more honest approach. There always seems to be a proportion of families who cannot afford an elaborate funeral but still want one anyway. Cheaper funeral options are readily available, without any loss of dignity, but they’re often shunned because the deceased “deserves better‚”. One result is an identifiable trend now for funerals ‚- particularly for youngsters – being paid for by online crowd-funding appeals “because he/she deserves the best send-off”. That always strikes me as rather backward logic and once again it illustrates how the label ‘poverty’ is often relative to spending choices.