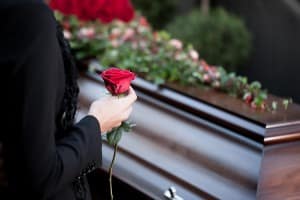 “Funerals have always been about what humans do rather than about what they buy when someone they love dies.”

From ‘The Good Funeral: Death, Grief and the Community of Care’ by Thomas G. Long and Thomas Lynch

Our Funeral Celebrant Members often speak with members of the public who have been misled by ill informed professionals.
Below is a list of urban myths, misinformation – and complete rubbish – all of which we have heard from people who have contacted us.
The only legal requirement in the UK for funerals is that the death must be certified and registered, and the body must be disposed of.
(‘Disposal means disposal by burial, cremation or any other means, and ‘disposed of’ has a corresponding meaning’ – source Births and Deaths Registration Act, 1926.)

You do not have to employ a funeral director

We hear regularly from families who have been told by a crematorium or cemetery office that they don’t deal with the public, and that the funeral must be booked by a funeral director.

Please let us know if you are told this, and we will be more than happy to make contact on your behalf and correct the individual concerned!

Here are the facts, as stated by the Institute of Cemetery and Crematorium Management in response to a query about a council that would only permit funeral directors registered with them to carry out funerals in their cemeteries:

“A local authority (or any other burial ground owner) can not insist that a bereaved person must employ a funeral director.
Provided that the Registrar’s Certificate or Coroner’s Order for Burial is delivered with an interment form prior to the burial, and the deceased is brought to the cemetery with enough people to carry and lower the coffin, it must be permitted.”

“We thought that you had to use a funeral director to organise a funeral.”
“You have to have a coffin, it’s against the law if you don’t.”
“The hospital told us that because my daughter died from HIV we have to cremate her.”
“We presumed you have to use a hearse to move a body.”
“If you bury someone in your garden in a home burial, you must register the grave at the Land Registry”
“The funeral director has told me that because my husband’s ashes cannot have a woodland burial because his body was embalmed.”
“I was told a vicar has to say the committal.”
“The council say they have a right to demand details of our home burial.”
“We have been told there is a charge payable if a body is taken across county borders.”
“We had to have her embalmed; we were told if anyone wanted to visit, that was the law.”
“The crematorium said they would not be able to cremate Dad unless we used a funeral director.”
“The hospice staff said that our daughter had to be cremated because she died from a particularly aggressive cancer.”
“Of course everyone knows they re-use coffins.”
“The ashes of different people get mixed together at the crematorium.”
“The curtains have to be closed at the end of a cremation ceremony.”