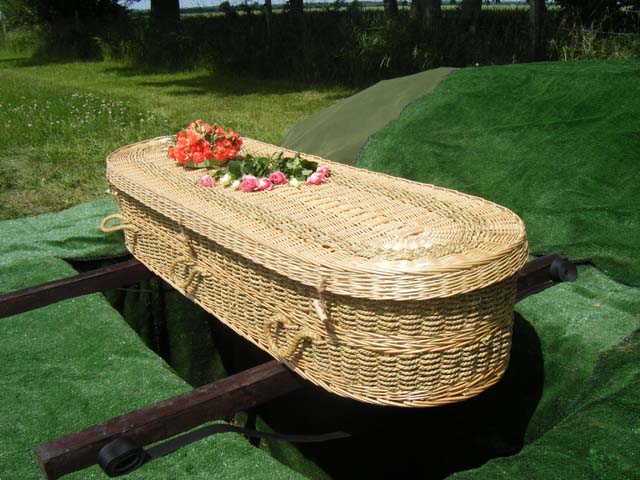 As a Funeral Celebrant I have noticed that over recent years “Green Funerals” are becoming ever more popular. Why? The answer is staring us in the face.
People that know me, if asked, could attribute many adjectives with regard to my personality. I very much doubt that “green” or “environmentalist” or “eco-friendly” would be amongst them.
Here in the UK, we have limited space and a high population density. During the 20th Century there was a massive shift towards cremating our dead rather than burying them – arguably, due to a combination of cost, the availability of land, efficiency and a societal shift towards secularism. The latter has opened up our neighbours minds and many of us now realise that we have choices.
The cost of cremations has almost tripled over the last 10 years. Cremations are an efficient way of disposing of our dead, but in no way could they be classed as economical, environmentally friendly or individual.
The cost of traditional burials in church or municipal burial facilities have similarly increased and people seem to be oblivious to the fact that our loved ones will one day be unceremoniously dug up, buried deeper and in all likelihood have someone else, unrelated, buried on top of them.
Choice has led to the rise in popularity of Civil Funeral Celebrants as we increasingly reject religious dogma. Furthermore, in recent years we have become ever more careful with our money and as a result we actively seek ways in which to economise.
With the relatively recent advent of Civil Celebrants, “choices” and “financial prudence” – alternatives to traditional costly burials and cremations have been sought. One such alternative is “Green Burials”

By way of example I recently took the opportunity to visit “The Orchard Burial Ground” and its owner , Paul Disley.

The Orchard is set in rural Lincolnshire, just outside Lincoln – a beautiful oasis of calm that even under close inspection, is difficult to see that it is a Green Burial Ground ( I suppose that is the point) and is a pleasant place to be – regardless of the weather.
Graves are marked with a simple, engraved side-plate sized natural stone that lays flush to the ground to enable mowing.

Paul is also a Funeral Celebrant and a Green Funeral Director. His approach to his work is authentic, reassuring, cost effective, pragmatic, respectful and unique.

Paul can provide an all inclusive funeral package (burial) from as little as ¬£1700 . The whole process is heartfelt, meaningful, engaging, unpretentious and memorable. Furthermore, the site is open to all, regardless of any religious affiliation or not as the case may be.
When compared to traditional funeral directors, Paul goes the extra mile and offers significant savings (typically ¬£000’s). Additionally, the “carbon footprint” of such a funeral is massively lower than that of traditional funerals.
Funeral Celebrant led ceremonies can be held at a nearby picturesque community hall and / or at graveside – Paul will even lay on refreshments.

The Orchard is also one of the few Green Burial Grounds in the UK that permits the burial ofpet remains with their former owners.

For information on becoming a Funeral Celebrant contact me here.