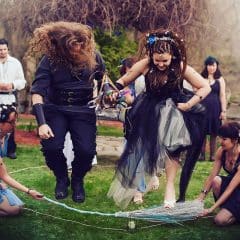 What is a Handfasting?

A handfasting is an old Pagan custom, dating back to the time of the ancient Celts. A handfasting was originally more like an engagement period or betrothal, where two people would declare a binding union between themselves for a year and a day. The original handfasting was a trial marriage. It gave the couple the chance to see if they could survive marriage to each other. After a year goes by  the couple could either split as if they had never been married or could decide to enter permanently into marriage.

Today, Wiccans and Pagans are not alone in embracing handfasting as a part of their wedding ceremony. A handfasting in the modern world is a ritualistic / ceremonial sign of a commitment for “as long as love shall last.” A handfasting ceremony can be tailor made to suit the couple.

There are many variations of the traditional handfasting. After the intended couple both declare their intent to enter into this union, the hands of the couple are clasped and fastened together with a cord or cords just before, just after, or during their vows are made to one another. The wrapping of the cord forms an infinity symbol. The handfasting knot that is tied in a symbolic representation of oneness between the couple. In a show of unity, they become bound to each other.

Each Wiccan and Pagan path has different decrees concerning the colour, length, type and of number of cords used to handfast the couple. One custom may have the couple facing each other, binding both pairs of hands of the bride and groom. Another custom is to have only the right hands, and another one of each right and left. There are many variations of the handfasting rite. It all depends on the bride, groom, and the celebrant they chose to preside over their wedding, commitment or vow renewal ceremony.

The handfasting ritual is a beautiful, mystical rite of passage. Many non-Pagan and non-Wiccan couples are adopting this old custom, much like when couples borrow from other traditions to craft their own ceremony to match their distinctive personalities.

Q.  What is handfasting?

A.  The short answer to this question is: a handfasting is a component of a wedding ceremony which entails gently wrapping cords / ribbons around the bride and groom’s clasped hands and tying a knot, symbolically binding the couple together in their declaration of unity.

However, the long answer entails a bit of back-story.  Today’s modern day handfasting ceremony is a revival – of sorts – of the handfastings of yesteryear.  The ritual of handfasting was originally an element to a formal betrothal ceremony (the precursor to today’s engagement) perhaps going as far back as ancient Celtic Scotland, up to the 16th century reformation-era.  During the formal betrothal ceremony, in which a couple promises to one another their agreement in future marriage, there was a formal handshake to seal the deal.  This was called the handfæstung, meaning, a pledge by the giving of the hand.  The betrothals eventually became so formal that it was an event in and of itself, which eventually lead up to the wedding ceremony.  Oh, the drama!

One of the main reasons for this handfasting renaissance, if you will, is because today’s ever growing secular society can identify with the symbolism of an elaborate handshake agreement.  To illustrate the imagery and importance of the handshake, the knotting of cords around the hands was eventually incorporated, possibly by today’s neo-Pagans. Cord knotting presents an outstanding visual in illustrating intent. The handfasting ritual has been, almost effortlessly, adapted and incorporated into many modern  wedding rituals as the main ceremonial element in addition to – or instead of – the ring exchange.  Modern Pagans revived the literal tying of the knot.

Q.  Is it a legal marriage?

A.  The handfasting ritual can be incorporated into any wedding ceremony, just as can the ring exchange.  Whether or not a couple chooses to have a handfasting does not make or break the legality of the marriage.  Rather, the couple must take the proper steps to ensure that their marriage is recognised by the government if they do so choose.  Making sure one’s wedding is legal and binding and recognised by the state (or other municipal entity) varies from location to location, so check your local laws. Anyone can become handfasted if that is their intent.

Q.  Do you have to be Wiccan to have a handfasting?

A.  No.  In fact, the term handfasting arose during the early Christian era ( Christians hijacked the ritual to appeal to Pagans) when Paganism had already lost much ground.  It’s the symbolism that our multicultural society has reclaimed and today embrace.  But people from all walks of life can experience the beautiful handfasting ritual during their wedding ceremony.  In practice, Wiccans are taught to place well-thought intention into ritual, and therefore they do so into the knotting of the cords. Because of this, the ritual of the handfasting invites a unique, magical experience between the couple.  But you don’t have to be Wiccan to feel the magic if your intentions are true.

Q.  How do I find someone to perform a handfasting?

A. Fortunately, most Family Celebrant members of the UK Society of Celebrants perform handfasting ceremonies to their clients specifications, just contact us here for more information.

A.  Well now that you have a better understanding of what a handfasting is, you can see that any ceremony created by a bride and groom can be customised to fit the couple’s wishes.  The most important aspect of the handfasting ritual, after the intent of course, is the cords.

Traditionally in much of cord magic (including handfastings), cords may be nine feet in length, with each end knotted or bound with thread to prevent fraying. A natural substance (such as cotton or silk) is ideal.  In many initiation ceremonies, cords are measured as per the length (height) of the persons involved in the rite; however, the numbers 3 and 9 are very magical and can be incorporated simply by using a cord that is 9 feet or 3 meters long, which is totally acceptable.

In handfasting cords, traditionally, 3 cords are used, each a different color: white for purity (or a “clean slate”), blue for fidelity, and red for passion.  However, you may choose other colours that you or the bride & groom feel match their intent.  For instance, the bride may love the color pink and be using it as one of her wedding colours.  Pink would be a lovely color to use in the cords as well.  Magically, pink symbolises love.  Or you can incorporate a green cord, which symbolises fertility and growth.  Do a search for color correspondences or go here  for a variety of references.  My wife and I used a purple cord – which symbolises emotional strength.  Not to mention that it was one of our wedding colours!

Some people braid the three cords together, others only use one cord.  It’s up to you!  The best way to pick out cords is to use your intuition along with your intent.  You can never go wrong with that.

Q. What would you say is the biggest misconception about handfasting?

A. Handfastings is just now experiencing a revival, not many people have had the chance to create false impressions about the ritual.  For those who may have heard of handfastings however, there may be a misconception about the original handfasting, or the betrothal, to have lasted a year and a day.  The “year and a day” timeline stems from Wiccan ritual, whereby one cycle of the Wheel of the Year is completed (e.g., from Samhain – pronounced “sow-in” – the Wiccan new year) to the day after Samhain of next year.  This somehow may have been incorporated into the subconscious minds of some Wiccans and Pagan folk, and they may have come to the conclusion that the old betrothals, or the promise to marry, were also exactly a year and a day.  But to the best of my knowledge there is no definitive proof of the handfastings of old to be exactly a year and a day.

Q. Any advice for potential brides out there considering a handfasting ceremony?

A.  I think that most people are concerned about family acceptance of the ceremony.  Most people have a very narrow idea of what a wedding ceremony should be, and what exactly constitutes someone to become husband and wife.  Because of this I have received several questions from people about how to talk to their parents and close relatives about having a handfasting, or even more pressing, a Wiccan ceremony.  Each family is different so approaches should be dealt with on a case-by-case basis.  But one should always have respect for and sensitivity towards all love ones involved.

As I said earlier, one can easily incorporate a handfasting ritual into almost any ceremony.  The further a bride and groom want to stray from the norm, the more complicated it can get (depending on the families and their beliefs), so a sensitive and understanding approach is always best.  And, like in marriage, you may just have to compromise.  The journey of marriage begins with the planning of one’s wedding.