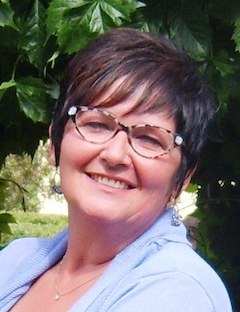 I was born and raised in rural Saskatchewan, Canada.  I grew up in a farming community with my 3 siblings.  I attended the local school, graduating in 1978.  After graduation, I attended nursing college, but found that nursing wasn’t the career for me.  I joined the work force and tried my hand at being a bank teller and a server at our local pub.  In 1981, I attended The Artistique Beauty College and graduated with a Diploma in Hairdressing.  I moved back to my home town and began a 32 year career working with my Mother (and eventually, my Daughter) in our family owned hair salon.

I married in 1986 and welcomed the births of my 2 children in 1987 and 1989.  In the early ‘90s, I became interested in local government and went on to become a councillor for the Town of Stoughton, Saskatchewan.  I held that position for over 8 years.  During that time, I became a Marriage Commissioner for the Province of Saskatchewan.  I have had the distinct pleasure of conducting marriage ceremonies all over the beautiful province of Saskatchewan and I find nothing better than being invited to be part of such an important and joyous step in people’s lives.

I have also had the honour of conducting several funeral services for family members and friends over the years.  While it was difficult, I felt humbled and extremely honoured to be able to participate in each of these celebrations of life.

In 2007, I became Mayor of the Town of Stoughton, Saskatchewan.  I served 2 terms and am very proud of the accomplishments for the betterment of my small community that took place in that time.  On a personal note, in 2010, my husband and I separated and subsequently divorced.

Call it Fate or Kismet or Karma, but in 2013, while on holiday in New Orleans, I met my husband, Peter, and one year later, to the date, we had a commitment ceremony in New Orleans.  Thus began a major change in my life.  I started the long, and sometimes arduous, task of immigrating to the UK.

Peter and I married in June of 2015 and I am happily settled in a small village in Surrey - just rural enough to not be too overwhelming for this Canadian, small town, Prairie girl.  Peter’s work requires travel and I tag along.  We have been all over this beautiful country that is so steeped in history.  I hope, someday, to find some information on my British roots.