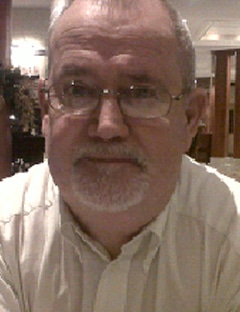 My name is Roger Boxall. I am 64 years of age, married to Sue. We have been married for 20 years although we have both been married previously. We have six children between us  along with seventeen grandchildren. We currently  live in East Malling. I was born on 10th October 1950 in Guildford, Surrey. I have an elder brother, John, and  a  younger sister Jane.
I attended the local primary and secondary schools receiving a good general education although not motivated enough at that age to study for exams so ended up leaving at age 16. During the last year at school I had a Saturday job delivering meat orders on a push-bike for our local butcher where I also used to help out before and after school. After leaving school I went to work in the shop full time. Unfortunately after about a year the owner decided to retire and close the shop so after a short spell working for another butcher in Guildford I went to work for The Danish Bacon Company delivering groceries to shops, hotels and schools.
This was followed by an assortment of jobs until in 1975 I joined the Automobile Association as a telephone operator. I then spent the next 30 years building a career with the Association which included spending 8 years as a Roadside Patrol then Sergeant finally  ending as a Senior Computer Systems Analyst.
In 2005 the company decided to close the office in Maidstone where I worked and following discussions with Senior Management I decided to take early retirement. I then spent the next three years working for a Heavy Goods Vehicle Agency driving articulated lorries delivering an assortment of goods across the UK.
I then decided that at this time of my life driving around the UK in a forty ton lorry was getting too much so started looking for something a little more relaxing and eventually saw a position for a casual funeral service operative advertised at a local branch of Dignity Funeral Services. Following an interview I joined them in May 2009 as a Driver/Bearer.
After 4 years in this position I was offered a full time position as a Mobile Funeral Service Arranger. This involves meeting relatives of recently deceased person and guiding them through how to arrange the funeral service. We explain the options availbale to them regarding Religious or Non-Religious Services, the content of the service including selecting music, compiling eulogies, how to include poems and/or prayers. We also explain and arrange all the external requirements regarding Doctors, Ministers or Celebrants, reserving a date and time at the local crematorium or church, press notices, floral tributes and order of Service booklets. We also advise them on how to register the death, inform local and National  Government Agencies, writing obituary notices and any other advice or information they may need.
I am currently enjoying my work however I feel I can offer more support and guidance to recently bereaved people by becoming a Celebrant.