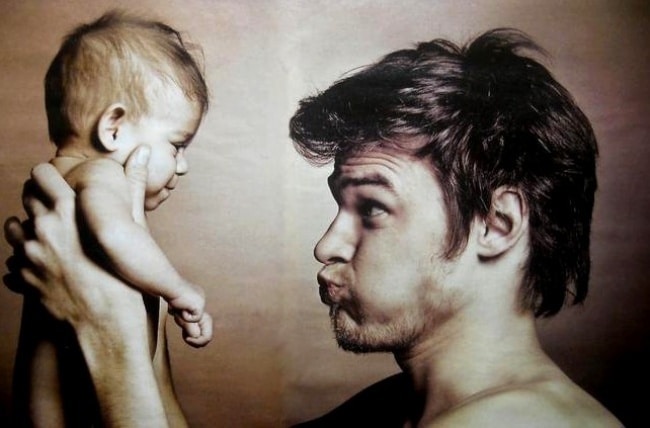 We found a truly touching story written by Rafael Zoehler and thought we’d share it with you: Tissues at the ready.
Death is always a surprise. No one expects it. Not even terminal patients think they are going to die in a day or two. In a week, maybe. But only when this particular week is the next week.
We are never ready. It is never the right time. By the time it comes, you will not have done all the things that we wanted to. The end always comes as a surprise, and it’s a tearful moment for widows and abore for the children who don’t really understand what a funeral is (thank goodness).
It was no different with my father. In fact, his death was even more unexpected. He was gone at age 27. The same age that claimed the lives of several famous musicians. He was young. Way too young. My father was not a musician and neither a famous person. Cancer doesn’t pick its victims. He was gone whenI was young, and I learned what a funeral was because of him. I was 8 and a half, old enough to miss him for a lifetime. Had he died before, I wouldn’t have memories. I would feel no pain. But I wouldn’t have a father in my life. And I had a father.
I had a father who was both firm and fun. Someone who would tell a joke before grounding me. That way, I wouldn’t feel so bad. Someone who kissed me on the forehead beforeI went to sleep. A habit which I passed on to my children. Someone who forced me to support the same football team he supported, and who explained things better than my mother. A father like that is someone to be missed.
He never told me he was going to die. Even when he was lying on a hospital bed with tubes all over him, he didn’t say a word. My father made plans for the next year even though he knew he wouldn’t be around in the next month. Next year, we would go fishing, we would travel, we would visit places we’ve never been. Next year would be an amazing year. We lived the same dream.
I believe‚ actually I’m sure he thought this should bring luck. He was a superstitious man. Thinking about the future was the way he found to keep hope alive. The bastard made me laugh until the very end. He knew about it. He didn’t tell me. He didn’t see me crying.
And suddenly, the next year was over before it even started.
My mother picked me up at school and we went to the hospital. The doctor told the news with all the sensitivity that doctors lose over the years. My mother cried. She did have a tiny bit of hope. As I said before, everyone does. I felt the blow. What does it mean? Wasn’t it just a regular disease, the kind of disease doctors heal with a shot? I hated you, dad. I felt betrayed. I screamed with anger in the hospital, untilI realised my father was not around to ground me. I cried.
Then, my father was once again a father to me. With a shoebox under her arm, a nurse came by to comfort me. The box was full of sealed envelopes, with sentences where the address should be. I couldn’t understand exactly what was going on. The nurse then handed me a letter. The only letter that was out of the box.
“Your dad asked me to give you this letter. He spent the whole week writing these, and he wants you read it. Be strong.” the nurse said, holding me.
The envelope read‚ ‘When I‚’m gone‚’. I opened it.

Son,
If youre reading this, I’m dead. I’m sorry. I knew I was going to die.
I didn’t want to tell you what was going to happen, I didn’t want to see you crying. Well, it looks like I‚ve made it. I think that a man who’s about to die has the right to act a little bit selfish.
Well, as you can see, I still have a lot to teach you. After all, you don‚’t know crap about anything. So I wrote these letters for you. You must not open them before the right moment, OK? This is our deal.
I love you. Take care of your mom. You‚’re the man of the house now.
Love, dad.
PS: I didn’t write letters to your mom. She‚’s got my car.

He made me stop crying with his bad handwriting. Printing was not easy back then. His ugly writing, whichI barely understood, made me feel calm. It made me smile. That‚’s how my father did things. Like the joke before the grounding.
That box became the most important thing in the world for me. I told my mother not to open it. Those letters were mine and noone else could read them. I knew all the life moments written on the envelopes by heart. But it took awhile for these moments to happen. And Iforgot about it.
Seven years later, after we moved to anew place, I had no idea whereI put the box. I couldn’t remember it. And when we don’t remember something, we usually don‚’t care about it. If something goes lost in your memory, It doesn’t mean you lost it. It simply doesn’t exist anymore. It‚’s like change in the pockets of your trousers.
And so it happened. My teenage years and my mother‚’s new boyfriend triggered what my father had anticipated along time before. My mother had several boyfriends, andI always understood it. She never married again. I don’t know why, butI like to believe that my father had been the love of her life. This boyfriend, however, was worthless. I thought she was humiliating herself by dating him. He had no respect for her. She deserved something a lot better than a guy she met at a bar.
I still remember the slap she gave me after I pronounced the word ‚”bar‚”. I‚’ll admit thatI deserved it. I learned that over the years. Att he time, when my skin was still burning from the slap, I remembered the box and the letters. I remembered a specific letter, which read‚’When you have the worst fight ever with your mom.‚’
I ransacked my bedroom looking for it, which earned me another slap in the face. I found the box inside a suitcase lying on top of the wardrobe. The limbo. I looked through the letters, and realized thatI had forgotten to open ‚’When you have your first kiss‚’. I hated myself for doing that, andI decided that would be the next letter I‚’d open. ‚’When you lose your virginty‚’ came right next in the pack, a letter I was hoping to open really soon. Eventually I found whatI was looking for.

Now apologize to her.
I don’t know why you’re fighting andI don’t know who‚s right. But I know your mother. So a humble apology is the best way to get over this. I‚’m talking about a down-on-your-knees apology.
She’s your mother, kid. She loves you more than anything int his world. Do you know that she went through natural birth because someone told her that it would bet he best for you? Have you ever seen a woman giving birth? Do you need a bigger proof of love than that?
Apologize. She’ll forgive you.
Love, dad.

Myfather was not agreat writer, hewas just abank clerk. But his words had agreat impact onme. They were words that carried more wisdom than all ofmy15years ofage atthe time. (That wasn‚’t very hard toachieve, though).
Irushed tomymother‚’s room and opened the door. Iwas crying when she turned her head tolook meinthe eyes. She was also crying. Idon‚’t remember what she yelled atme. Probably something like ‚”What doyou want?” What Ido remember isthatI walked towards her holding the letter myfather wrote. Iheld her inmyarms, while myhands crumpled the old paper. She huggedme, and weboth stood insilence.
Myfather‚’s letter made her laugh afew minutes later. Wemade peace and talked alittle about him. She told meabout some ofhis most eccentric habits, such aseating salami with strawberries. Somehow, Ifelt hewas sitting right next tous. Me, mymother and apiece ofmyfather, apiece heleft forus, onapiece ofpaper. Itfelt good.
Itdidn‚’t take long beforeI read‚’When you lose your virginty‚’:

Myfather followed methrough myentire life. Hewas withme, even though hewas not nearme. His words did what noone else could: they gave mestrength toovercome countless challenging moments inmylife. Hewould always find away toput asmile onmyface when things looked grim, orclear mymind during those angry moments.
‚’When you get married‚’made mefeel very emotional. But not somuch as‚’When you become afather‚’.

Hello, son. Ihope you‚’re anold man now.
You know, this letter was the easiest towrite, and the first Iwrote. Itwas the letter that set mefree from the pain oflosing you. Ithink your mind becomes clearer when you‚’re this close tothe end. It‚’s easier totalk aboutit.
Inmylast days hereI thought about the life Ihad. Ihad abrief life, but avery happy one. Iwas your father and the husband ofyour mother. What else couldI ask for? Itgave mepeace ofmind. Now you dothe same.
Myadvice for you: you don‚’t have tobeafraid
PS: Imiss you

Thanks to Bright Side