So, what is a celebrant? A simple question with a not so simple answer.

Deciding who will help you present your ceremony can be problematic. Whilst the clergy, registrars, Celebrants and Humanists may be familiar terms, until it comes to booking one, many couples will be in the dark about the differences between them.

A person who performs or officiates ceremonies, and whilst commonly seen at weddings they can also conduct other ceremonies like vow renewals, baby namings, funerals, interments and memorials. 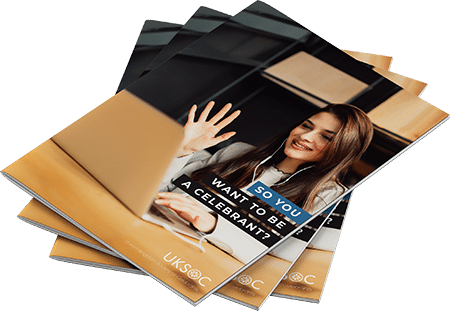 A celebrant isn’t bound by any religion, statute or doctrine, meaning celebrant ceremonies enable us to construct and perform completely personalised ceremonies for every client. Whilst celebrants may have a personal belief, these beliefs are just that, personal.

Ceremonies carried out by the clergy, most often contain religious wording, prayers and religious hymns, leaving little room for the people they are meant to be working for.

Ceremonies carried out by registrars must adhere to required statutory words and any music played or any wording said must not contain any religious or spiritual connotations.

Ceremonies carried out by a humanist contain humanist doctrine and anything said or any music played isn’t allowed to have spiritual connotations similar to those of a registrar.

Ceremonies can contain any wording the clients require whether religious, spiritual or personal. Ceremonies are about those the ceremony is for, telling the story of the clients, not the ideologies of religion or anti religion sentiment. Worthy celebrants are merely the mouthpiece of their clients.

Should a family choose to include any religious or spiritual wording, a prayer or a hymn these can be included. It is a common misconception that non-religious ceremonies are Humanist. Unlike Humanists, we do not talk about our beliefs; it isn’t about us.

UKSOC Funeral Celebrants are trained  to write and lead a cremation, burial, natural burial, interment,  scattering of ashes and memorial ceremony based on what the bereaved family want. It's all about them.

Constructs and leads completely personalised weddings, commitment and renewal of vows ceremonies based on the choices and requirements of each couple. Couples who choose to have a celebrant wedding ceremony from a UKSOC Wedding Celebrant will receive a tailor made ceremony which puts them at the heart of the ceremony.  No scripts, no templated words, each one is unique. UKSOC Wedding Celebrants are trained to write and lead weddings, renewal of vows and commitment ceremonies. It's all about them.

Does the same as a Wedding Celebrant and are involved with many other life ceremonies such as naming, adoption, family blending, divorce, and engagement ceremonies. It's all about them.

Who can be one?

Anybody who feels they possess the qualities required of a celebrant can embark upon celebrant training, however, successful completion of the chosen course determines if the candidate has what it takes to be a celebrant.

What does it take?

Age, gender, confidence, and life skills do not qualify as attributes. Determination, discretion, diplomacy, the ability to learn and to research information, being I.T literate, good communication skills, confidence with public speaking and a professional manner are qualifying attributes.

Where can I train?

There are several providers of celebrant training in the UK. As with celebrancy, research is key. Look at what the other providers can offer you before choosing who to go with. Our training takes place at our training facility at Sheffield in Salford or from the comfort of your own home via a distance learning option. More information on the various courses and training options.