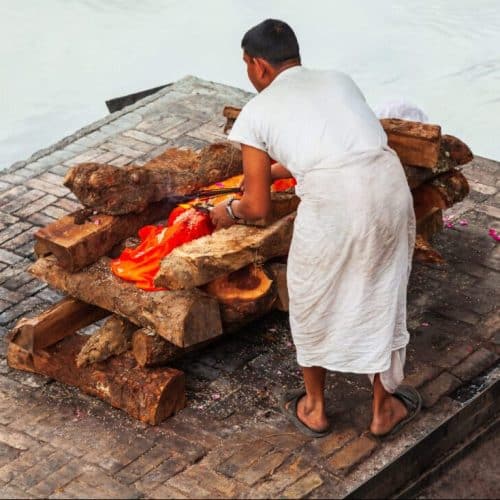 Hindu funerals, with nearly a billion followers worldwide. Hinduism is the third largest religion in the world. It teaches that their God is within each being and object, and the purpose of life is to become aware of this divine essence. The Hindu faith originated in India, however, today there are many denominations worldwide, each with slightly different customs and beliefs.

This is a guide to Hindu funerals and the death rituals that they follow.

The Hindu faith is centred around reincarnation; the belief that when someone dies, the soul is reborn as a different form. They believe that although the physical body dies, their soul remains and continues to recycle until it settles upon its true nature. This can take many lifetimes, and with each death they strive to move closer to Brahma, the Hindu God. Additionally, they believe their soul’s next incarnation will depend on the actions throughout their previous life, this is also known as Karma.

Why do Hindus cremate?

After death, Hindus believe that the physical body serves no purpose, and therefore does not need to be preserved. They choose to cremate their loved ones as they believe it’s the quickest way to release the soul and help with reincarnation. Historically, Hindu cremations would take place on the Ganges River, India, and the family would carry the casket to the crematorium site. Nowadays, Hindus are cremated locally, and most funeral directors can accommodate the traditions and rituals of a Hindu cremation.

What are Hindu funeral rites?

Traditionally, Hindu funeral rites take the form of chants or mantras which are overseen by an officiant, usually a Hindu priest or the eldest son of the bereaved. They will gather the family and friends and lead them in the various Hindu death rituals. These include:

How long after death is a Hindu funeral?

According to Hindu death rituals, the body should remain at the home until cremation – this is usually within 24 hours of the death. Due to the short time frame of Hindu cremation, embalming is considered unnecessary. It is customary for family and friends to visit the home of the bereaved to offer their sympathy.

What happens at a Hindu funeral?

How long does a Hindu funeral last?

Usually Hindu funeral services don’t last longer than 30 minutes, however, this will vary depending on the wishes of the deceased, and their family.

What to wear to a Hindu funeral?

Unlike other religions, black is considered inappropriate for a Hindu funeral. Instead, funeral etiquette is that mourners (both male and female) should dress in white. No head covering is required for either sex and open-toe shoes are also acceptable. Women should dress conservatively, covering their arms and knees. 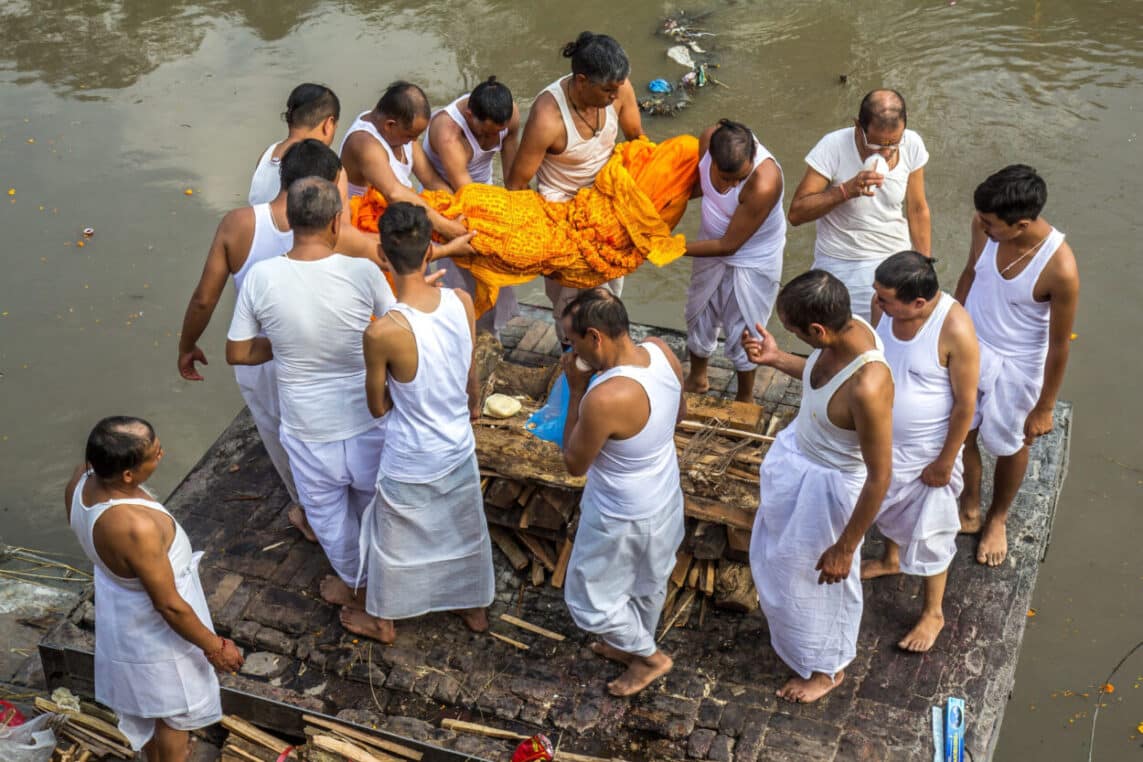 What to bring to a Hindu funeral

It is not common to bring gifts or flowers to the funeral, instead, they should be given to the family ahead of the ceremony. Food is also not part of Hindu custom.What happens after a Hindu funeral?

Traditionally, the Hindu mourning period ranges from 10 to 30 days. Throughout this time, families may display a picture of their loved one, adorned with a garland of flowers, somewhere in their house. Visitors are also welcome during this period. On the 13th day of mourning, it’s common for the grieving family to hold a ceremony (‘preta-karma’) where they perform rituals to help release the soul of the deceased for reincarnation. Additionally, on the first anniversary of the death, the family host a memorial event that honours the life of their loved one.