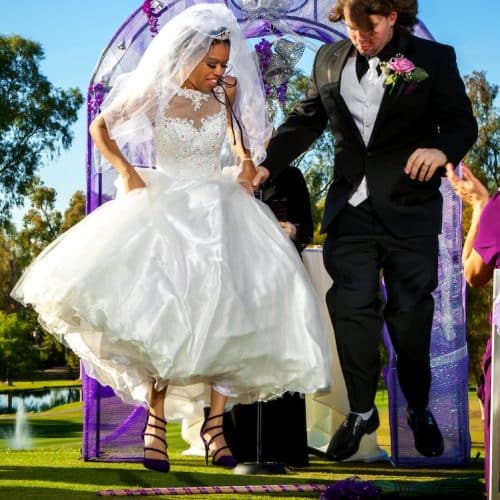 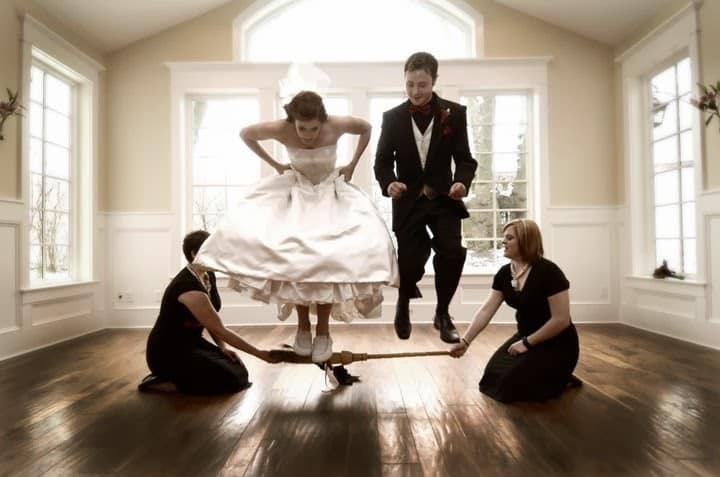 Jumping the broom is a time-honoured wedding tradition in which the bride and groom jump over a broom during the ceremony. The act symbolises a new beginning and a sweeping away of the past, and can also signify the joining of two families or offer a respectful nod to family ancestors. For all of these reasons, jumping the broom is an increasingly popular part of many modern wedding ceremonies particularly in the UK & USA. 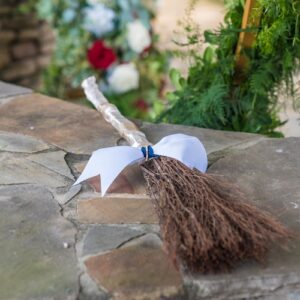 Today’s wedding brooms, however, are a far cry from those first used in jumping the broom ceremonies. They’re still made with a wooden handle and natural bristles, but they’re kept as treasured keepsakes and probably never actually used to sweep the floor.

Some brides prefer to create their own brooms, while others purchase ornately decorated brooms ready-made. Far from ordinary, these brooms are outfitted beautifully with silk ribbons, fresh or silk flowers, bows, beads, charms and more. During the ceremony, broom jumping can be paired with a reading, song, poem or simple explanation of the tradition.

The broom can even be used to include guests in the ceremony: A couple can have guests write their names on pieces of decorative paper attached to ribbons, and then the ribbons are tied to the broom before it is jumped. This symbolises that the guests and their associated well wishes go into the marriage with the couple.

Ribbons on the broom may be considered symbolic of the tie that binds the couple, while the broom handle represents life and the straw signifies the couples’ families. In pagan ceremonies, the broom represents a perfect balance between the male and female, with the handle symbolising a phallus and the bristles symbolising female energies [source: Pagans Path].

Regardless of the ways in which the broom is incorporated into a wedding, it should be accompanied by a full understanding of the custom’s historical significance.

History of the Jumping Over the Broom Ceremony

There’s no definitive answer as to where jumping the broom originated. Some people believe that the ceremony began in the 18th century in West Africa where, among some cultures, handmade brooms were used not only for cleaning but also for removing evil spirits. During a wedding ceremony, the broom was waved over the heads of a couple to ward off these spirits. Sometimes the broom was placed on the ground directly in front of a couple’s path as they turned to exit the ceremony, at which point they would jump over it. The person who jumped the highest was good-naturedly designated as the household’s decision maker [source: Aaregistry.com]. 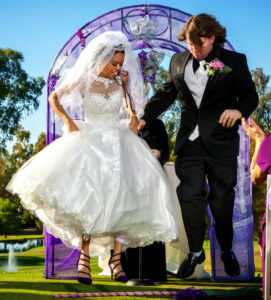 Jumping the broom was used as a marriage ceremony in the 18th and 19th century American South among some slave populations. It served as an alternative to courthouse or church weddings, which were prohibited by the then race-based laws and customs. Like many African traditions, jumping the broom survived but became less common in the decades immediately after emancipation, perhaps because the ceremony was too closely associated with slavery at the time.

People of African descent weren’t the only ones who jumped the broom during that period in history. The wedding custom was a common practice in Welsh, Scottish and Roma cultures [source: BBC]. In pre-christian Wales, couples who wished to commit to each other followed pagan tradition: A broom was placed across a home’s doorway and, like jumping a hurdle, the groom leapt over it, and then the bride followed. If neither one of them made the broom fall, or took a face-plant on the floor, the marriage was meant to be. If the broom took a tumble, so did hopes for their marriage: The wedding would be cancelled altogether [source: Jones]. The ceremony was widespread enough (especially among couples who didn’t want or weren’t given the legal right to have a court or church sanctioned wedding) that Charles Dickens mentioned it casually in “Great Expectations” in 1861; he wrote that a couple was married “over the broomstick.”

Today, jumping the broom is still an important wedding tradition for many ,whether they wish to pay homage to their ancestors, signify a fresh start or add a personal twist to their special day.

Thanks to How Stuff Works