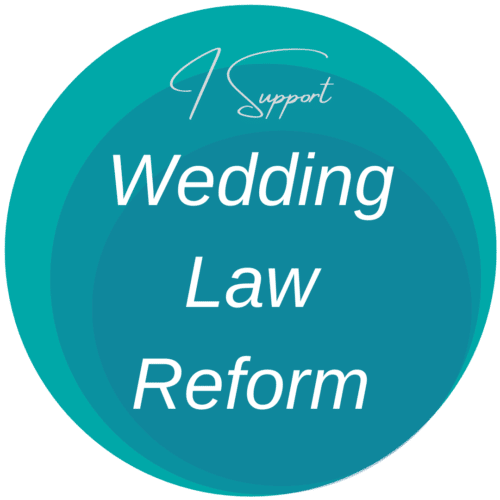 Help us campaign for change

Just a few days ago the Law Commission published its long-awaited final report into wedding law reform in England and Wales. The Law Commission recommendations to government focus on moving to an officiant-based system, whereby the officiant (e.g. celebrant, registrar, minister) would be licensed to carry out the marriage rather than the venue in which the marriage takes place. This is similar to systems in place in many English speaking countries across the globe.

This change would open up a huge range of venues to couples across England and Wales, including beaches, meadows, woodlands and private gardens.

Importantly, it could also pave the way for both independent celebrants and non-religious belief organisations to conduct legally binding marriages. However, that will be a decision for government, so it’s important that MPs are made aware of the demand that already exists for celebrant-led weddings.

You can show your support for wedding law reform

These recommendations are the first important step on the road towards legalising celebrant-led marriages and creating a simpler, fairer system for couples getting married in England and Wales. But we need as much support as possible to make sure government takes them seriously and implements them in full.

If you support these changes, please download our Wedding Law Reform badge below for use on your websites, social media and stationary. The images below contain hyperlinks to the final report, the larger image being for Instagram use and the smaller image (which can be resized )for other social media and websites.

When sharing on social media please use any hashtags you feel are relevant and will help to get your posts more widely read – it would be helpful if you would incorporate our campaign hashtags: #ChangeWeddingLaw #SpeakUpForCelebrants  #LegaliseCelebrantWeddings #weddingcelebrantsuk  #uksoccelebrants 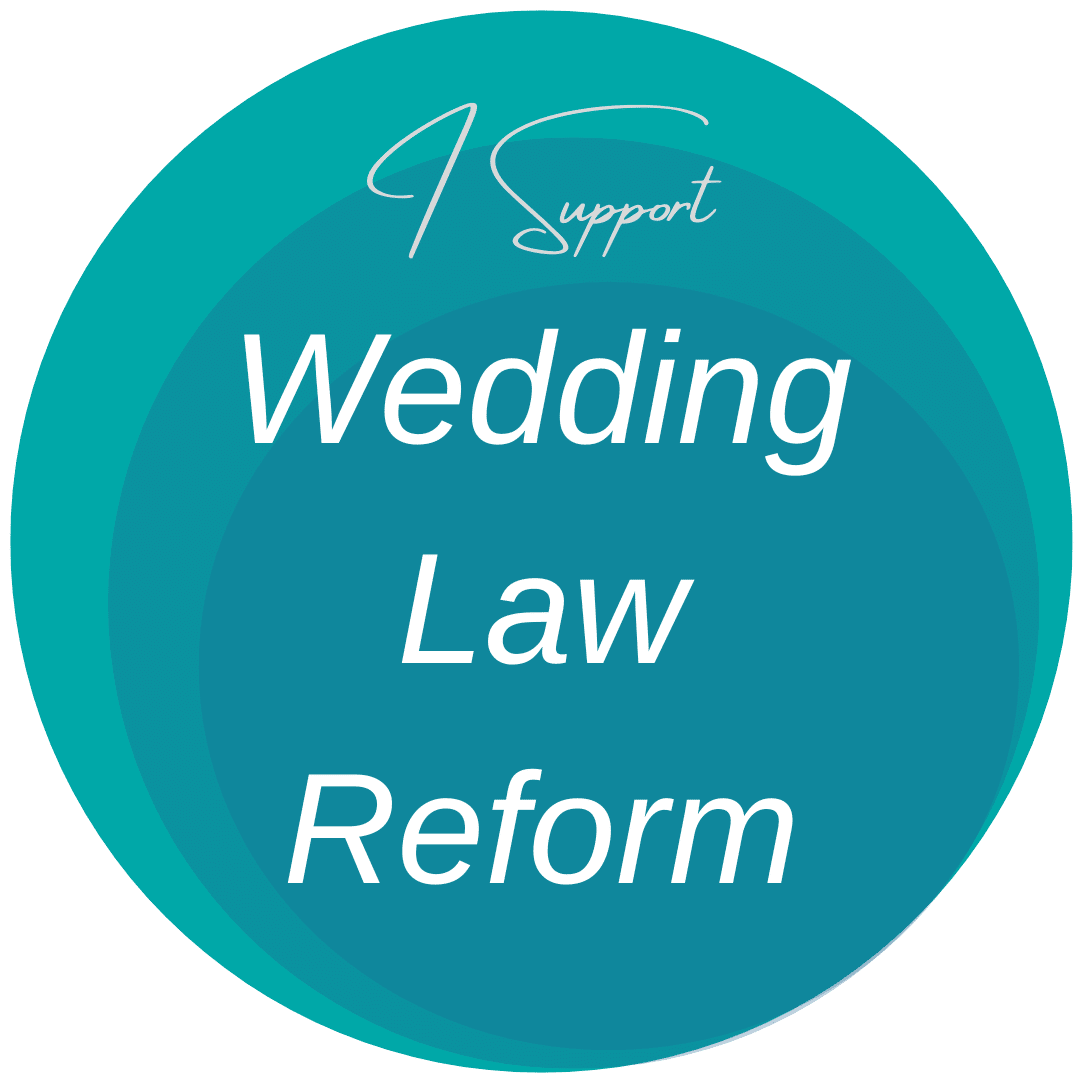 What are celebrant weddings?

1000’s of celebrant-led wedding ceremonies a year occur in England and Wales. These ceremonies are perfectly legal to hold, but as it stands a celebrant cannot perform a legally binding marriage – that part must be done separately, meaning added inconvenience and cost for couples.

Celebrant weddings have rapidly increased in popularity over the past decade due to the rising demand for personalised, bespoke ceremonies, and growing awareness amongst couples of the choices available to them.

It is widely accepted that reform in this area is long overdue and that the current marriage law is not fit for modern society, with much of it dating back from 1836.

What is the wedding law review?

The Law Commission’s review into the Marriage Law of England and Wales began in earnest in 2019, with the final report passed to government in July 2022. The Law Commission was asked by the UK Government to conduct this review due to the current laws being so outdated, complicated and unfit for modern couples.

In its final recommendations the Law Commission proposed moving away from the current buildings-based licensing system in favour of an officiant-based system. We were delighted to see that independent celebrants were listed as one of the key groups that could be considered as licensed officiants.

UKSOC as one of the Executive Members of the Wedding Celebrancy Commission  have played a key role in being consulted by the Law Commission over the last few years, ensuring that all of the organisations in the celebrant world spoke with one voice.

Ultimately it will be the government’s decision whether to

a) press ahead with marriage law reform; and

It is therefore important that everyone who supports the cause of legalising celebrant-led marriages gets involved in our campaign to change marriage law and speak up for celebrants.

There are three important things we need to achieve in the campaign to legalise celebrant marriages:

1) Campaign for law change – The first step is to campaign for law change. Only two-thirds of Law Commission recommendations are enacted into law, so there is no guarantee the Government will act soon. From 19th July 2022, the Government has up to 6 months to submit an interim response and up to 12 months to submit a full response. If this response is positive then a bill for reform will need to be drafted and taken through the standard parliamentary process. We are looking at a fairly long road – so we must keep up the momentum.

2) Raise awareness – insufficient people know that celebrant-led weddings are even an option, and many believe that all celebrants are humanist. It is our job to inform MPs, the media and wider society that the majority of celebrant-led weddings are carried out by independent celebrants. Being independent allows us to work with each couple to design a ceremony completely reflective of them, including elements of spirituality or cultural customs if they choose.

How to speak up for celebrants

The three points above are all about raising awareness and keeping up the momentum that will drive change in our wedding laws. At the UKSOC we will be leading from the front to ensure that the voice of our members and independent celebrant is heard, contacting the press, social-media and MPs at every key stage. But it is so important that individual voices are heard too, so we strongly encourage anyone who wants to see these changes to help with our campaign.

Here are a few ideas for how you can get involved:

Write to your MP

Support from MP’s is the most crucial aspect of this campaign, as they will be the ultimate decision-makers. When writing to MPs it is vital that we are concise, friendly and clear about what we are asking for and how this issue affects us on a personal level.

Your local MP is responsible for their own constituents, so while wider political issues are important, the starting point should always be more of a personal one. If you are celebrant, how would this potential law change affect your business? If you are planning a wedding, how could it affect your big day, and your rights to express yourself as you wish?

Key points to remember when writing to MPs are:

Submitting articles and blogs to your local newspapers, magazines or online media outlets is another great way to get your voice heard. Press releases about the Law Commission review are a useful starting point, followed by articles that highlight how these potential law changes could revolutionise wedding ceremonies.

Journalists are far more likely to run with stories that include a ‘human interest’ angle. Therefore, when you make contact with the press we would highly recommend sharing stories/photos of some celebrant-led weddings you’ve conducted or been a part of (provided you have permission to do so).

Social media is another fantastic way to spread the word and campaign for independent celebrants. Well-informed posts with relevant links and images are great, tagging any relevant people or organisations (e.g. your local MP).

Don’t forget those all-important hashtags. Use any that you feel are relevant and will help to get your posts more widely read. Our main campaign hashtags are #ChangeWeddingLaw, #SpeakUpForCelebrants and #LegaliseCelebrantWeddings

If you would like any further information about how you can get involved campaigning for these law changes, just ask. We will be holding a number of Zoom Seminars over the coming months that will hopefully enable us to have a coordinated approach.

In conjunction with AOIC.