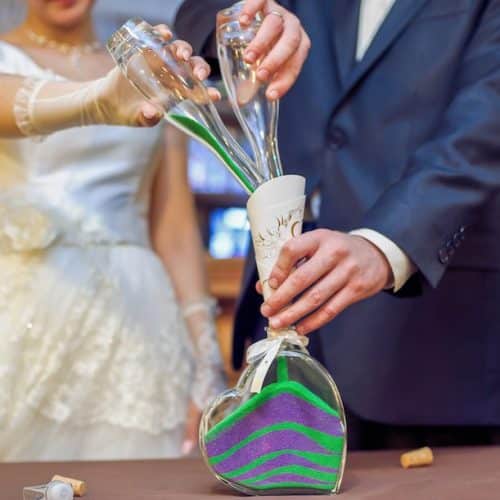 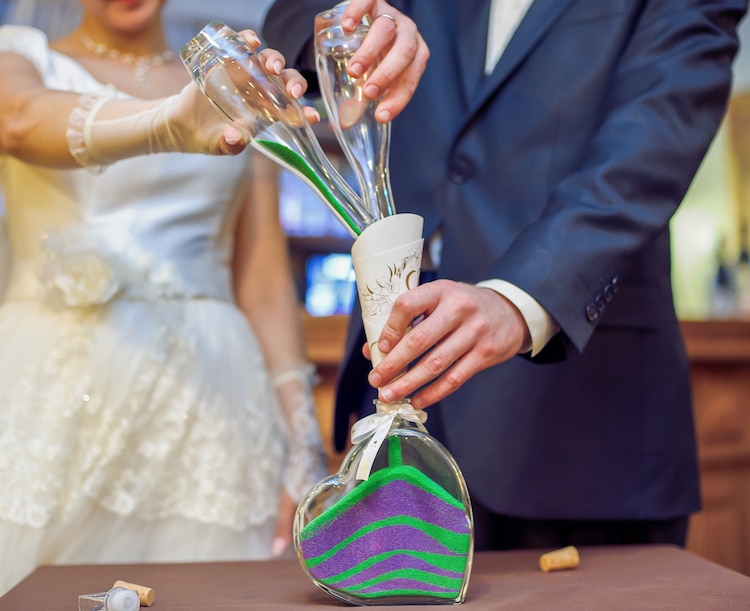 Weddings were once rather pre-prescribed affairs and would never include special elements like the Unity Sand Ceremony. In most cases that meant a bride, a groom, an officiant, some witnesses, and vows that were passed down through generations. You could, married or not, probably recite the ceremony by heart.

As cultures and ethnicities have blended, though, the realm of the mainstream has expanded. Additions of “non-traditional” elements like beach locales, personalised vows, civil celebrants, and unity-candle ceremonies have become, if not the norm, then at least very normal, and many betrothed couples are looking for ever-newer, ever-more-surprising ways to make their weddings unique.

One that has rather recently entered the engaged public’s consciousness is the sand ceremony, more formally known as the unity sand ceremony. Much like the unity candle with which many of us are familiar, the sand version offers a symbolic, visually poignant moment that can add not only a personalised feel but also a bit of whimsy to an otherwise formal affair.

While the unity sand ceremony has a lot in common with the unity candle ceremony, it differs in some important ways. In this article, we’ll find out what the sand version means, what it entails, how to pull one off seamlessly, and about some time-savers available to make it even easier to incorporate this ritual into many different ceremonies

First, what the ceremony is, what it symbolises and how to make it happen‚ 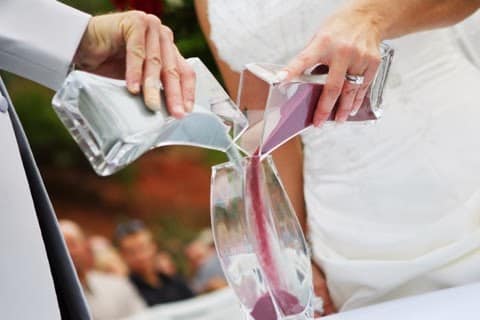 As far as wedding-ceremony extras go, this one has quickly gained in popularity for good reason. It’s a rather simple, visually appealing and highly customisable ritual that not only contributes a bit of worldliness but also leaves the newly-weds with a meaningful souvenir of their big day.

Plus, unlike the unity candle, this ceremony isn’t complicated by a light breeze. Sand ceremonies can move outdoors with no problem at all.

Hard as it would be to separate out those grains of sand, that’s how difficult it is to separate these two people. It usually takes place after the exchange of rings and vows (although it can go before or even during), and lasts just a couple of minutes.

A basic sand ceremony involves three (typically glass) vessels — one holding the bride’s sand, one holding the groom’s sand, and an empty one that will soon hold both, all sitting on a small table or stand. It goes something like this:

The end result is a glass container holding one of blue sand (the groom), one layer of pink sand (the bride), and a top layer of purple sand, showing how the joining of the two have created a new, equally beautiful entity.

And, it’s an entity that’s easy to make entirely your own‚

One of the greatest benefits to the sand ceremony is how easily it is to personalise. It lends itself especially well to blended families, when the bride and/or groom already have children. Having each child (or special relative or friend or parents) pour his or her own coloured sand into the vessel along with the couple involves them in the ceremony — and in the finished product — in a seamless, natural way.

Other ways to personalise the ceremony include:

However you decide to make the ceremony yours, you’re going to need a few supplies to make it work. They’re not tough to come by — just coloured sand and a few glass vases. But with the increased popularity of this ceremonial interlude, gathering everything you need is even easier‚

It’s not difficult to find coloured sand. You’ll come across it in craft stores, toy stores and art-supply stores, and you can easily buy it on-line. Glass vases are even easier to come by. Any shape will do, and you may even have the perfect vessels lying around the house. A container with special meaning, such as an engagement gift, vacation souvenir or a crystal vase passed down through generations, can make the ceremony and the finished product even more special. 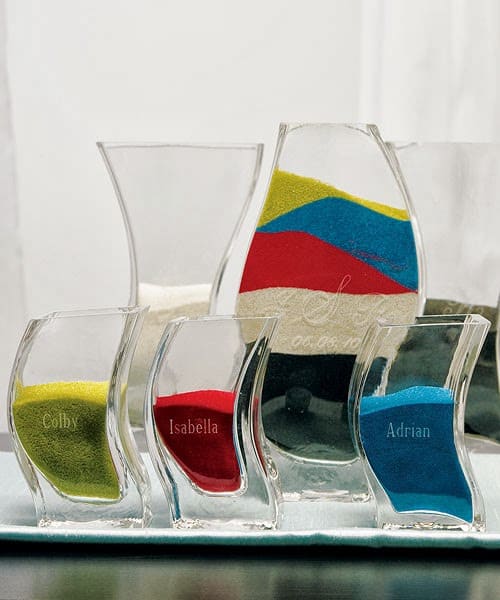 Still, with all that goes into planning a wedding, you may prefer an all-in-one solution — a sand-ceremony kit. These kits range in price from about £25 to £75. They can be basic, with three glass vessels (vases or urns) and two colours of sand; customised with extra vases for family members or friends; and engraved with the names of the bride and groom to create a more personal memoir of the wedding. You can also find a sand vessel that also serves as a picture frame.

The simplicity of the sand ceremony is part of its appeal, so there’s no need to complicate it with elaborate vows. The spiritual symbolism speaks for itself, so a few words from a celebrant and the betrothed are plenty.

The unity sand ceremony is an excellent alternative to the unity candle and is perfect for outdoor settings. But it does come with a warning: Sand can be messy. If all must be pristine, consider a glass funnel. It’ll help the bride and groom combine their lives with more precision.

Thanks to How Stuff Works.